Static toe is a measure of the static steer angle on a tyre in plan view. A tyre is said to have positive toe when the front of the tyre points towards the centre line of the vehicle, as shown in the diagram below. 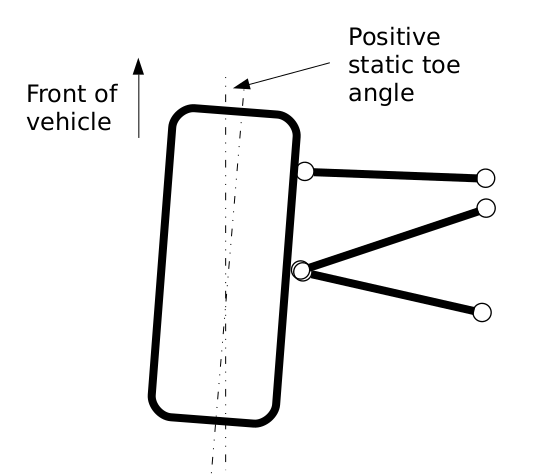 In general, static toe should be kept small. Running large amounts of static toe will result in the left and right tyres steering against each other increasing rolling resistance and tyre wear. If small amounts of static toe-in are used on both the front and rear suspensions, straight line stability can be improved. This is typically the setup adopted for production cars where toe settings are usually less than ~0.1 Deg.

Like static camber, static toe can be used to make small adjustments to the handling of a car. For example, increasing rear static toe-out will improve turn-in response. As the cornering load builds on the outside wheel, the toe setting gives an oversteer tendancy and will be felt as increased turn-in response. Excessive amounts, however, may make the car feel nervous.