Castor angle is the inclination of the suspension steer axis when measured in side-view. It is measured in Degrees and is positive when the top of the steering axis leans towards the rear of the vehicle.

Castor trail (or mechanical trail) is the distance between the tyre contact patch centre and the steer axis intersection with the ground when measured in side-view. Castor trail is measured in mm. Castor angle and castor trail can be seen in the picture below. 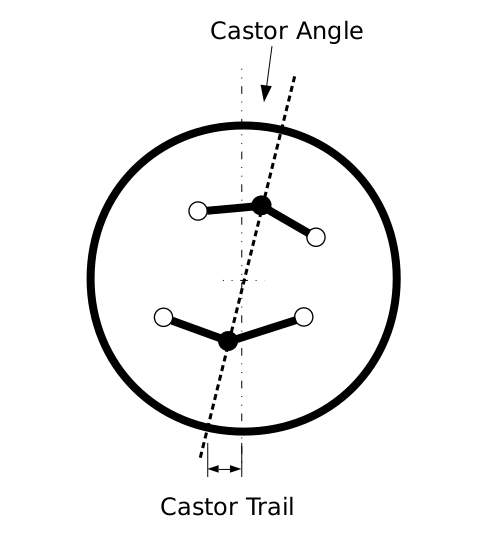 Castor trail contributes to stability and steering self-centering by providing a moment arm for lateral tyre forces. The overall suspension trail is a combination of castor trail and pneumatic trail. Pneumatic trail is a lever arm generated by the fact the centre of lateral force generated by a tyre acts to the rear of the tyre contact patch centre (this will be discussed in more detail in a future post on tyre behaviour). The combination of castor trail and pneumatic trail contributes to the steering ‘feel’ of a car. Pneumatic trail is nonlinear with tyre lateral (cornering) force. It approaches zero as the tyre reaches the limits of grip. The resultant reduction in steering torque is a signal to the driver that the limit has been reached.